Eduardo Robert
3D Artist
© All rights reserved
Back to top 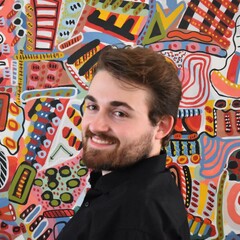 Eduardo Robert is a 3D artist working to get his start in the game industry. As a recent graduate of George Mason's Computer Game Design program, he spent a lot of time inside and outside of class to push his ability to create 3D assets. With this time he learned new software and techniques to continue improving his art skills. This drive pushes Eduardo to try and focus on the details to make his art shine.

During his time at Mason Eduardo worked as a 3D art intern at Time For Art Studios, LLC. There he worked closely with the project lead to create game-ready 3D assets, such as a hovercycle asset used by the main character. Outside of the internship, Eduardo worked with classmates to create games independently of Mason. He worked as a 3D artist creating several environmental and prop assets. Over the course of 2020, Eduardo worked as a 3d Artist creating environmental and prop assets in Project Brawl Buddies, a third-person shooter that focused on grenades. He also participated in a week-long Game Jam as a 3D artist which started project WinderWalkers, a cooperative puzzle game. After the hard work, Eduardo is proud that Winders walkers placed #33 out of 1825 participants.

Eduardo is knowledgeable in software such as 3ds Max, Photoshop, and Substance Painter. He has gained experience using the Unity engine over the course of his time at Mason and more recently has been learning asset implementation and lighting in the Unreal Engine. He is also practicing Zbrush to be able to confidently create High-poly models that can be used for baking normals.